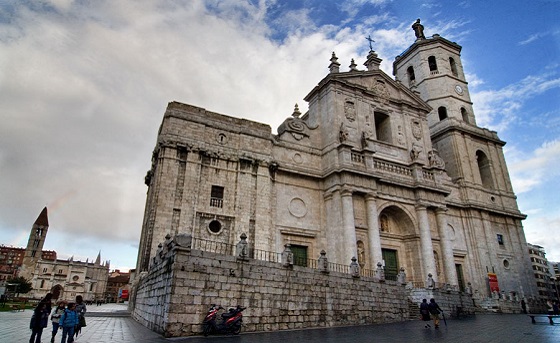 It was dedicated to Nuestra Señora de la Asunción (Our Lady of the Assumption) and built on the site where the third gothic Collegiate Church of 1527 was initiated. In 1582 Juan de Herrera designed, over the basic layout of the former structure, a Church consisting of three naves and transept. In 1596, at the behest of Felipe II, Valladolid was granted the category of City, creating thereby its Diocese, and elevating its principal church to the status of Cathedral. In the 18th Century, Alberto Churriguera took up the Herrerian outline and added his own peculiar baroque imprint. The tower, damaged by the Lisbon earthquake of 1755, collapsed in 1841. Contrary to the original project of Herrera, the tower standing today was erected on the opposite side, octagonal in design, and crowned later in 1923 with a statue of the Sacred Heart of Jesus. In its interior, the major altarpiece by Juan de Juni stands out, as well as the Diocesan and Cathedral Museum inaugurated in 1965.