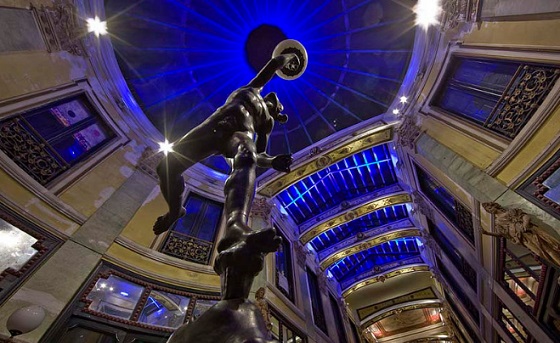 The Lighting Project “RÍOS DE LUZ” “ (Light Rivers) symbolically reintegrates” the Esgueva river into the city, transforming it into a light path that goes through and links different areas of Valladolid city centre.
Each area contains important buildings and monuments, as well as streets and squares. The actions taken in the context of this project focused on arranging and harmonising the environment, by unifying colour temperatures, reducing luminance levels and creating “shadows” to produce theatrical night scenes.
Environmental benefits and energy savings are the main virtues of this project: LED technology has been used resulting in less maintenance costs due to its long life. Additionally, the aesthetics and the careful illumination of monuments are to be highlighted: Visual comfort has been a priority, anti-glare systems and luminaries have been used to avoid“visual pollution”. The chromatic ranges used are bluish-green to connect the areas of the urban tour, to recall the original course of the Esgueva river, and the official purplish burgundy that identifies the city of Valladolid,  for cultural buildings. For the temples and churches included in the route liturgical colours have been used: Purple for Advent, Lent, and All Souls' Day, white for Easter, Christmas and related festivities, red for Palm Sunday, Good Friday, day of Pentecost, Apostles and of Holy Martyrs, and green the rest of the days.
The innovative project “Ríos de Luz” has been developed by the Valladolid City Council and funded by the“State Fund for Employment and Local Sustainability ”, in collaboration with Morelia, sister city in Mexico, where there is a similar project called Plan Luz.
To make this project known, the City Council, through the Sociedad Mixta para la Promoción del Turismo de Valladolid, has organised different routes in“Ríos de Luz”.
We believe that the results of this project can be summarised in four words: efficiency, aesthetics, design and sustainability.