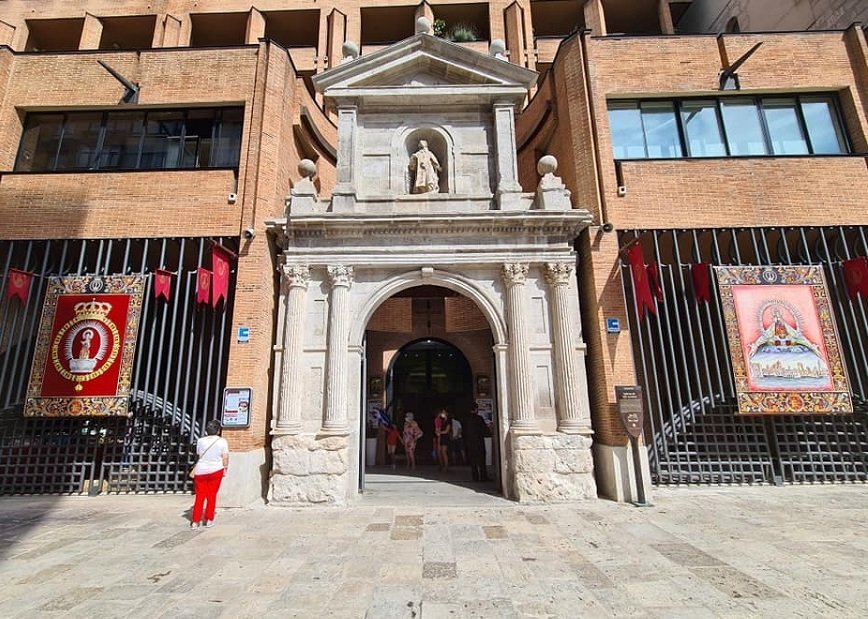 Inside the church a rich heritage is kept

The church of San Lorenzo today is very different to the original medieval hermitage, the later gothic church with three naves, or the baroque reconstructions. It was demolished in 1980, and a housing block was built, on whose ground floor the church was established. Of the old building, the facade and the square tower has been maintained. Inside the church and in the sacristy a rich heritage is kept, including sculptures of the Holy Family and the Virgen de las Candelas by Gregorio Fernández, the painting of the Cristo Yacente (Lying Christ) by Mateo Cerezo and the anonymous sculpture of the 14th century of the Virgin of San Lorenzo, Patron Saint of the city. According to the legend, around 1091 a priest brought to Valladolid the image of a Virgin from Consuegra (Toledo). It was concealed for some time and in 1125 a shepherd discovered the image on a cave near the bank of the Pisuerga river outside the city of Valladolid, close to the so called "Puerta de Aguadores". This is why for some time the Virgin was known as Virgen de los Aguadores. Afterwards it was moved to a hermitage dedicated to San Lorenzo, where it increased its miraculous reputation. In 1485, the alderman Don Pedro Niño decided to build a bigger church for the Virgin, and it started to be popularly known as the Virgen de San Lorenzo. In 1781, the brotherhood of Nuestra Señora de San Lorenzo was created to worship the Virgin. On October 21st 1917, the image of the Virgen de San Lorenzo  was canonically crowned and declared Patron Saint of Valladolid, and its festivity was set on the 8th day of September. The Virgin is taken out in procession on its day, during the Fairs and Festivities of the Virgen de San Lorenzo, on a path made of coloured sawdust and flower petals.