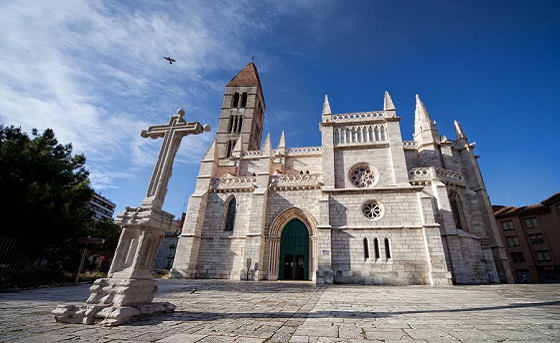 Dating from the 11th century, according to the documentary evidence (it was the chapel of the Palace of Count Ansúrez) and settled on Roman remains, its oldest elements date back to late 12th century and are of Romanesque style: the arcaded gallery located in the north and the slender quadrangular tower. The rest of the temple was rebuilt in the 14th century on the initiative of Alfonso XI of Castile, in a gothic style and with notable influences from the cathedral of Santa Maria of Burgos. This church was organized in three naves, crowned by three polygonal apses. Declared a National Monument in 1897, it underwent several restorations that led to the reconstruction of the body of the church (gothic), with the exception of the top and the auxiliary chapels. In the main altar stood the altarpiece dedicated to the Virgin, a work by Juan de Juni (16th century), currently kept in the main chapel of the Cathedral.